Fiction selections from the fabled quarterly, the Armory Common.

Yard Sale
A man bicycles to a cemetery with a woman to whom he's attracted, only to find out she has a "beau."
Yard Sale.pdf
Adobe Acrobat document [1.1 MB]

The story below is for students of Hemingway and Fitzgerald. Written during the Gulf Oil Spill. 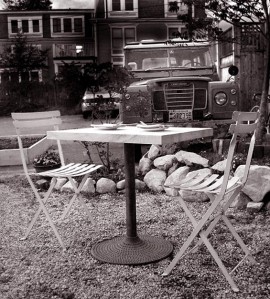 The terrace at Loie Fuller's, Providence.

"Ah, Monsieur Hemingway. Two? Tres bien. And did you enjoy your safari in Providence today?"

"It was hot. The sun also rises, but thank God it sets, too. But it was fine. Damn fine. We saw some strange game. But we did not take them. We drove on to Newport."

"Ah, Newport. It is so beautiful there!"

"It is all right. I wish I had seen it as Charles told me it was. Before the bridge. Most of it has been trampled. We did get glimpses of bearded villas and burning gardens that reminded me of Scott Fitzgerald and his preoccupation with the rich. We saw some rich, but we did not take them. I am thirsty. Traffic was hell, and I am thirsty. I will eat oysters and I will drink dry white wine. I will not think about writing until tomorrow. Let the well fill."

"Miss Stein is here with her friend. Shall I seat you with them?"

"Non. It ended badly between us. What I overheard was inaccrochable. Truly. But I am thirsty and we will take the table near the Land Rover. Has Charles come yet?"

"Oui, Monsieur Hemingway. He was here earlier with a very beautiful woman. Is she his wife? There are many who ask."

"I do not know about that. But she is beautifully built and I admire him to be able to write and have her as well."

"What is it they say, some people have all the luck?"

"Yes. He has that. But I am lucky, too. To be here on a fine evening and ready to enjoy a fine dinner. It is all very fine. And I am fine and you are fine, and we are all fine. And we will make a fine time of it before we go. Tomorrow, we leave to fish in the Gulf."

"Did not Papa hear? There are no longer any fish in the Gulf."

"It takes a man a long time to learn the truest things. I have told you that before."

"You have, Monsieur Hemingway. But it has been a long time. You have been dead 49 years."

"That must explain why I am so hungry. And thirsty, too. But no fish in the Gulf?"

"No fish. No birds. Nothing. The water is dead. The shoreline is dead."

"And I am dead, too. Then I am glad of it. I shall go on being dead. I will be dead with the birds and the fish. We will be dead together which is the very best way to be dead, just as being alive together was best that way."

"But Papa. In your day, you killed many animals and much fish."

"It is true. But there were many to be killed. Now you tell me they are a lost generation. Therefore, it is right to say a farewell to arms and exercise forbearance. We must always live in our time. That is the most important thing. With grace. As men. That is always the right and true thing."